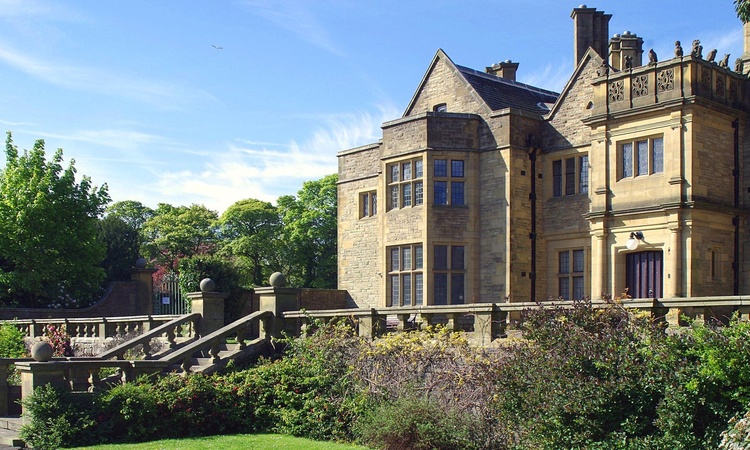 The Haworth Art Gallery, Accrington is Lancashire’s finest Arts & Crafts house and garden, completed in 1909 for William Haworth.  The architect was Walter Brierley, the most sensitive of the northern Arts & Crafts designers.  Every inch of the building displays his deep love of materials and craftsmanship.  The design brilliantly responds to its dramatic hillside location and provides an intimate setting for its  collections.

For most of his life, William lived with his father, Thomas, on Burnley Road, Accrington.  The Haworths were successful cotton manufacturers with humble origins.  Thomas, the founder of the firm, was an engraver who went on to own two cotton mills, became a town councillor and was very active in the Baptist Church.  William was a county councillor  and greatly involved in town life.  Both were presidents of the Accrington Mechanics Institute which provided many classes, lectures on arts and science relating to local industry.  The family was philanthropic, donating money and time for the good of the town.  During the 1878 cotton strike, when strikers smashed the windows of mill owners houses, their house was left untouched.

Some time after his father had died, William took the step of commissioning the new house and garden, which he called Hollins Hill.  From the outset, his intention was that the house, garden and collection of paintings and watercolours would pass to the people of Accrington after he and his sister, Anne, had died.

While Hollins Hill was being planned and built, William was also involved in the  Accrington Carnegie Public Library, which was built on part of the site of the Mechanics Institute building in 1908.  The new Library Lecture Room was designed to hang paintings and a special art exhibition from private collections was organised to celebrate its opening.  By 1921, the Library had assembled a permanent collection of 69 paintings the most important being Storm off the French Coast by Claude Joseph Vernet, presented in 1908 by T. E. Higham, Mayor of Accrington.

William died after living at Hollins Hill for only three years and when Anne also died in 1920 this singular expression of the Arts & Crafts – paintings, house and 13 acre landscaped garden – was generously bequeathed to Accrington Corporation for a public art gallery, museum and park in perpetuity, with a sum £28,000 (over £1 million current value) for its continued maintenance and upkeep.

The Accrington Library  collection was combined with William Haworth’s  twenty paintings and thirty watercolours, including My Ladye’s Palfrey by J. F. Herring and the watercolour, The Old Chair Mender and Pedlar by Birket Foster.  In 1925, Alice Ann Nuttall bequeathed her collection of watercolours and two animal paintings by Thomas Sydney Cooper and Edouard Frère’s The Laundress.  Edwin Hitchon also donated pictures  and W. M. Barnes bequeathed the painting Faith by Frederic Leighton.  In this way, Haworth Art Gallery was created.

Tiffany glassware is one of the great expressions of the Arts & Crafts Movement with its American Art Nouveau inspired glass vases, tiles and mosaics.  In 1879, Louis Comfort Tiffany founded his company in the United States of America.  In 1893 Joseph Briggs, a young engraver in Accrington, started as an errand boy.  Briggs worked his way up in the company becoming Tiffany’s right hand man and eventually became president at the company which closed when Briggs died.  Joseph collected and curated a collection of Tiffany Glass which he sent to Accrington between 1932 – 1933 when the company went into liquidation.  His intentions were that the collection should be for the people of Accrington.

When the collection came to the gallery after WWII, the Tiffany Glass enhanced the ‘unity of the arts’ vision of William Haworth at Hollins Hill.  The Tiffany collection is on permanent display and is the largest in Europe.

In 2016, Haworth Art Gallery took one more step towards William Haworth’s artistic vision by restoring the Hollins Hill Stables and Motorhouse and providing art and craft studios for local artists working within creative industries.  This complements the offer of the Gallery.

There is currently a full programme of performing arts at the Haworth and arts & crafts workshops for adults and children.  Please visit the official FaceBook page for details.   www.facebook.com/HaworthArtGalleryAccrington