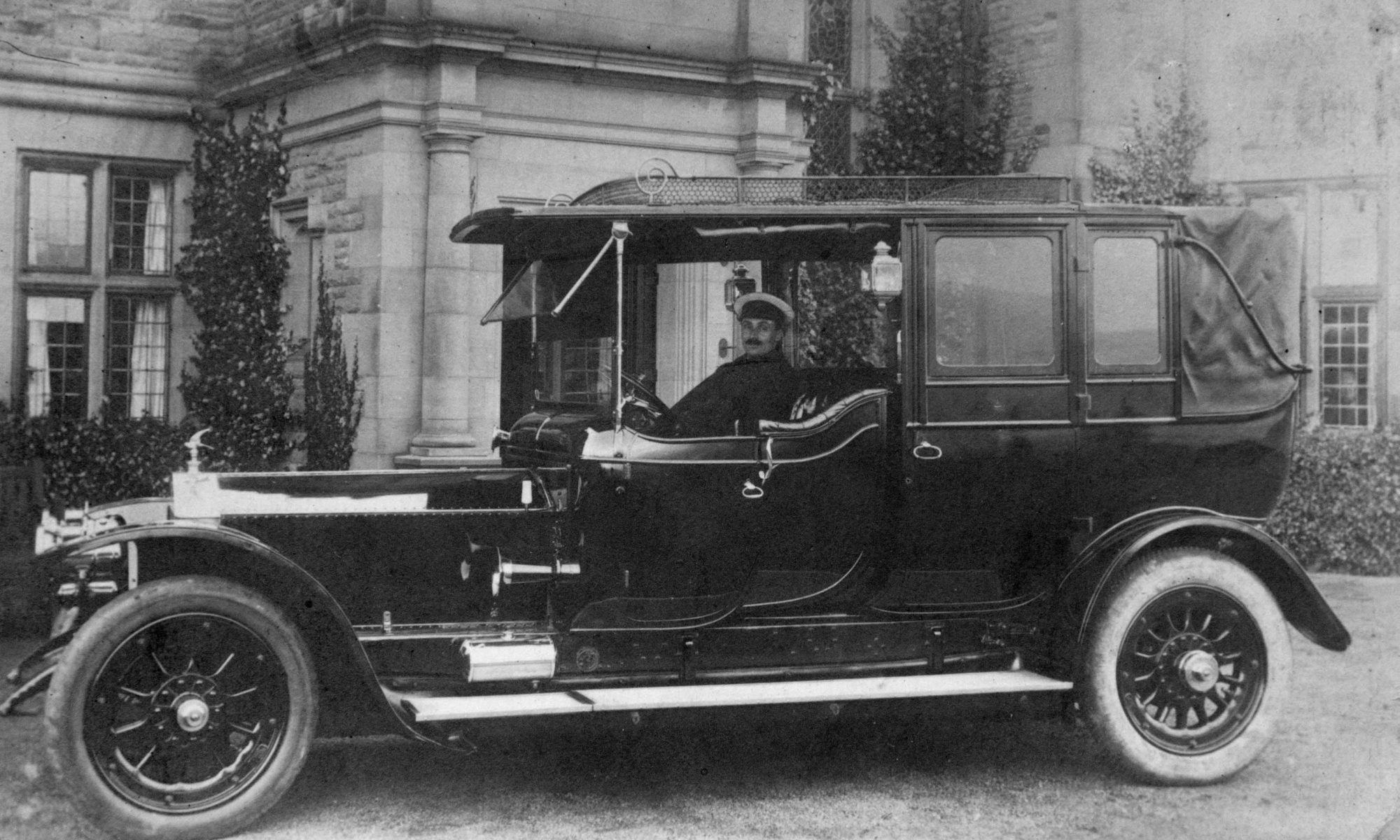 The Friends’ research is taking us on a fascinating journey into the Haworth’s lovely buildings, but also into the lives of the people who lived and worked here when it was Hollins Hill, a private house owned by William and Anne Haworth. Jean Emmett, who leads this research, has uncovered many personal details about the retainers who worked for the Haworths. Jean reveals some of her findings here.

William Beech, the Haworths’ coachman, hailed from Shropshire. When Beech came to Lancashire, William Haworth converted a small cottage for him in Hollins Lane, Accrington, where he lived while working at Hollins Hill. Slightly surprisingly to modern readers, perhaps, he and  his first wife Mary had 13 children – presumably all under the same roof. Perhaps less surprising then that at the age of 73 Beech was still working for Anne Haworth when she died in 1920.

The Haworths’ chauffeur, Joseph Taylor, was a Manchester lad. Originally a bicycle maker, and obviously mechanically minded, he became a chauffeur, which, in the early days of the motor car, required real mechanical nous. It was in this capacity that William Haworth sought him out and hired him. Part of this deal was that William bought – and furnished – a house for Taylor on Manchester Road, Accrington. During World War I, Joseph drove an ambulance in Palestine and Egypt. Like Beech, he continued working at Hollins Hill until Anne’s death, after which he bought the ‘Hole-In-Bank Garage’ on Manchester Road, Baxenden. Part of the generation to live through two world wars, he worked in this business until 1944. His son, a well-known local figure, affectionately nick-named Nobby, then took over the business and ran it until the early 1970s. A number of Joseph’s descendants continue to live in the area and have been very helpful to our research.

Abraham Naboth Imlah Whiston was born in Cheshire. Originally a horse groom, he  parlayed his skills into grooming two-legged clients and became William Haworth’s valet. He and his wife Minnie had three children. Their first home in the area was also on Manchester Road, then on neighbouring Harcourt Road, though Abraham occasionally stayed at Hollins Hill after social soirées at the house. When William died, Abraham stayed on as butler, but after Anne’s death he became the first curator of the house, which the socially minded Anne bequeathed to the people of Accrington.

Ellen Priestly was born in Russia, where her father was working, and was one of 11 children. As a small child she came to Heald (now Weir)  in Lancashire to live with her uncle and aunt and to attend school. She started work as a cotton weaver but became a housekeeper and was hired by the Haworths to nurse William’s and Anne’s elderly parents in their home on Burnley Road. After their deaths, she stayed on as Anne’s companion and travelled with the Haworths to Europe and Egypt.  In 1909 she moved with them to Hollins Hill and stayed on as companion until Anne’s death. Ellen loved music and the arts. She never married and had no children of her own, but had many nieces and nephews. She was described by one of Taylor’s descendants as “a lovely lady, tall and stately,” as her portrait also intimates.

Our research continues to give life to names and faces from over a century ago – an intriguing piece of the area’s social history. If you have any information about the Haworth or any of its occupants, we’d love to hear from you!