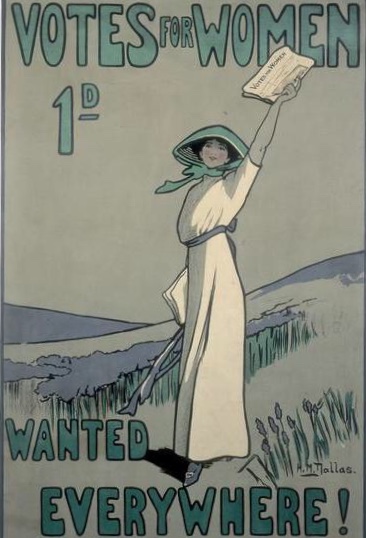 It is a truth almost universally acknowledged that women from the North West of England played an immense role in securing votes for women – the Pankhursts of Manchester are synonymous with the fight for women’s suffrage, as are the Kenneys of Saddleworth – but Accringtonians should be particularly proud of a pioneering suffragist even closer to home: Lydia Becker of Altham, who was an inspiration for the Pankhursts and so many other women of her day.

Becker, a noted and home-educated botanist and astronomer, got her own inspirational spark in 1866 from The Enfranchisement of Women, a paper by sister scientist, Barbara Bodichon. Its contents ignited her passion for voting equality and spurred her to start the Manchester Women’s Suffrage Committee, the first of its kind in the country, in 1867.

A few months later, when widowed shopkeeper Lily Maxwell’s name appeared by default on an electoral roll, Becker saw an opportunity for a promotional push. She accompanied Maxwell to the polling booth, where her right to vote was upheld. Becker encouraged other female heads of household to petition for similar rights and was instrumental in bringing their petitions to court.

In 1870, Becker and Jessie Boucherett started the Women’s Suffrage Journal and were soon organising speaking tours of the country. Lydia presented to an audience of 500 at Accrington’s Liberal Club on March 21, 1872. The following year, the club presented a women’s suffrage petition and just a few years later, the Accrington Liberals instructed their representatives to vote for women’s suffrage. (William Haworth, himself a staunch Liberal councillor, was no doubt familiar with his nearby neighbour). It was at an event organised by Becker in 1874, that a 15-year-old Emmeline Pankhurst attended her first gathering in favour of women’s suffrage.

In 1887, Becker was elected President of the National Union of Women’s Suffrage Societies. In Votes for Women: The Story of  a Struggle, Roger Fulford described Becker thus: “The history of the decades from 1860 to 1890 – so far as women’s suffrage is concerned – is the story of Miss Becker.”

More ardent in her support of votes for unmarried women than some of her fellow suffragists, Becker argued that single and widowed women were in even greater need of the vote than married women of means, who in 1918 became the first in the country to attain it. (On this point, Emmeline Pankhurst was to disagree with her). Becker also used her scientific acumen to campaign for equality in education, arguing that there was no inherent difference in women’s and men’s intellects.

This sometimes led to public ridicule, not least by politicians and the press. Lydia Becker was the subject of numerous cartoons, one showing her being thrown out of parliament wrapped in the Women’s Suffrage Bill.  But her legacy is of course one of pride to those who know her story and indeed there is currently an effort to commemorate her indefatigable efforts by local politicians.

Lydia Becker died in Aix-les-Bains in 1890, aged 63. Her name is marked on the grave of her father, Hannibal Leigh Becker, in the churchyard of St James, Altham – and, quite rightly, on the face of the Reformers’ Memorial in Kensal Green Cemetery, London, among the great historic figures of British reform and innovation.