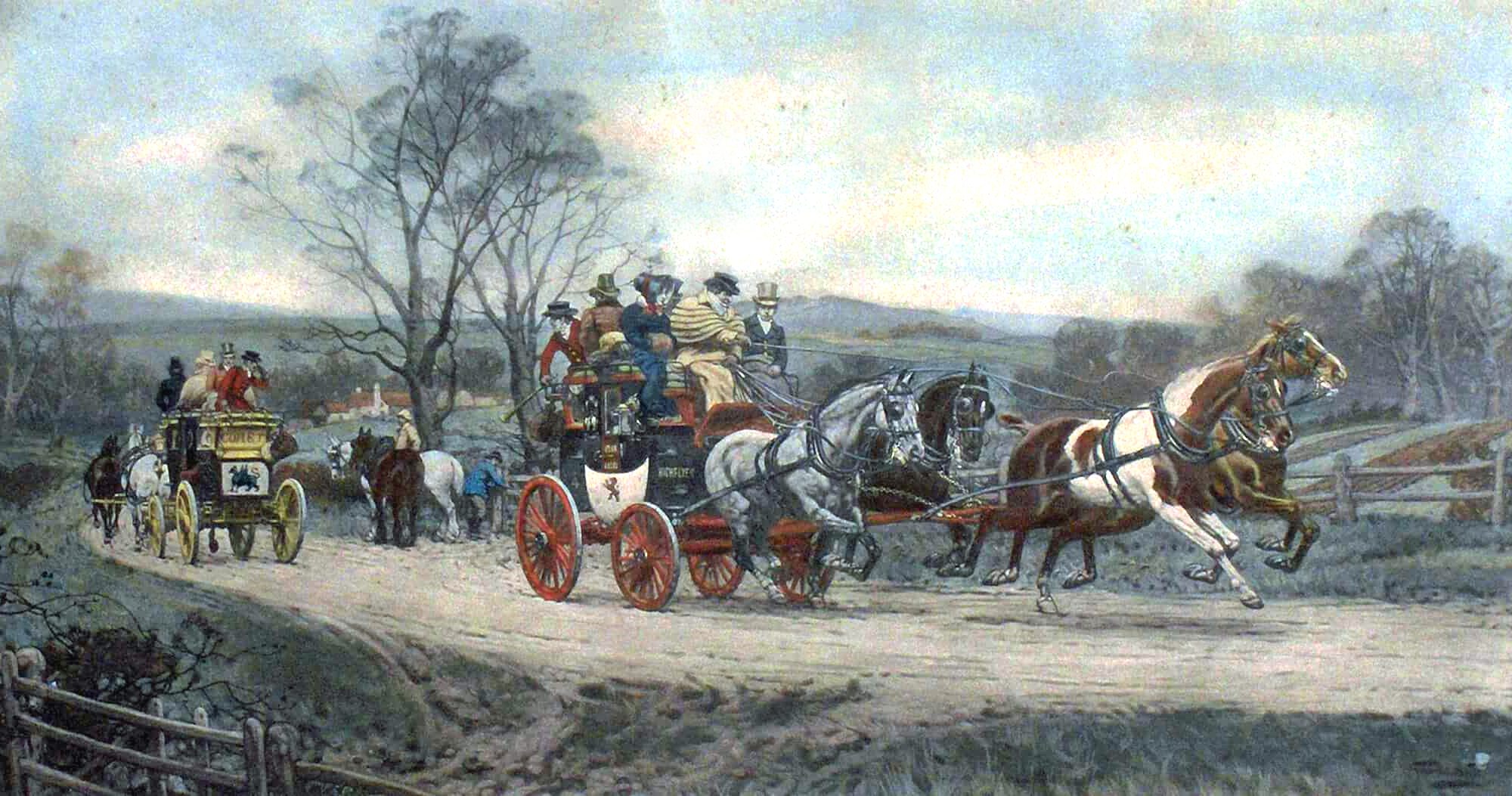 Had you been living in Accrington in 1815, you might have passed the time occasionally by just hanging around Abbey Street, or on Manchester Road in Baxenden, for no apparent reason. But in fact, you’d have been loitering with unseen intent because you’d heard tell that a stagecoach would be passing through, writes Roger Cunliffe.

The stagecoach was a tremendous innovation in its day and its arrival in your neck of the woods was met with great anticipation. The passage of the coach from Clitheroe to Manchester was greeted enthusiastically by large crowds that would line both sides of Abbey Street, jostling for a view of the carriage and its travellers, as well as the horses and coachmen.

Travel was extremely costly, and even men of means begrudged the expense of journeying by coach. The fare was twice as much to travel on the inside, with less than two feet width per traveller. Coaches usually accommodated six passengers on the inside. In early coaches, passengers facing the direction of travel would also have the indignity of dust and rain blowing in their faces. Only in later improvements on the coaches were blinds or windows added.
The more modestly priced roof seating could accommodate twice as many as the interior, but there was the ever-present danger of falling off! Not to mention the greater discomfort to external passengers of inclement weather (a virtual certainty in the North of England). The combined load of passengers would bring the weight of the coach to some two or three tons, so gentlemen passengers on the roof were obliged to get off and walk up steep hills to alleviate the horses’ burden (this, incidentally, is said to be the origin of the nickname Ha’penny Brow on the main road north into Preston, where the cheaper fare necessitated a walk up the long incline).
The turnpike roads traveled by stagecoaches were maintained by payments at toll houses along the route (see earlier post on Blind Jack for more on the local turnpike). Accrington’s surviving toll house where tolls were collected on the turnpike between Manchester and Clitheroe, is in Oak Hill Park and can be seen inset into the park’s eastern perimeter wall on Manchester Road. A coach drawn by six horses would have to pay around three shillings to pass.

By 1818, there were at least two rival coaches on the road: the Rocket and the Highflyer. Either arrival was still regarded as an event on Abbey Street. The sound of the guard’s horn was the signal for the gathering of townsfolk round the Red Lion Inn (as it then was) to await the arrival of the coach with the latest news from Manchester or Clitheroe way.

Coaching Inns sprang up along the routes for the refreshment of the passengers and no doubt the guards too. The current Railway Hotel at the Baxenden-Rising Bridge border has characteristics of a Coaching Inn. The coaches did not stop for long, however, and if you missed hearing the guard’s horn, you would be left behind.
There was stiff rivalry to get back before the competition, this being a point of comparison in deciding which coach to take, so drivers were happy to take payments for getting back first. Accidents were occasionally the unfortunate result of accelerated speeds on poor roads and hills. The illustration shown above demonstrates how the Highflyer might have raced home in an attempt to beat its rival, the Rocket.
Nowadays, if you’re waiting around with no apparent intent on Abbey Street or Manchester Road, it might just be that your particular bus company has moved on. No names mentioned!