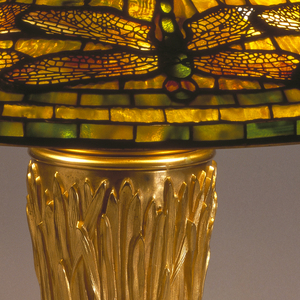 A delightful visit to the Cooper Hewitt, Smithsonian’s Design Museum in New York to mark its acquisition of a Tiffany turtleback chandelier from Macklowe Gallery  Housed in the former New York city mansion home of Scottish financier and philanthropist Andrew Carnegie, the museum has formally acquired this fine example of a Tiffany pendant lamp for permanent display in its recently restored Teak Room.

As the home’s former library, the Teak Room is the most intact of the Carnegies’ family rooms. On the first floor (second if you’re American) of the  mansion, it is a burnished cocoon of a room, a sanctuary where the family could relax away from the house’s more public lower floor. Decorated by artist and interior designer Lockwood De Forest in the Arts & Crafts idiom, it is inspired by his infatuation, and that of his contemporaries, with Indian design and craftsmanship. Its ceiling’s filigree pattern depicts a bramble of interwoven branches against a field of lacquered ochre. The gleaming golden light of the chandelier illuminates both the ceiling and the lustrous red-gold sheen of the stylized floral wall coverings to subtle effect.

The chandelier was designed by Louis Comfort Tiffany and was constructed around 1910. While not original to the room, it is entirely at home, replacing the original turtleback chandelier. The chandelier’s shade is constructed of individual turtleback tiles of dense favrile glass, similar to those  in the Haworth ‘s own collection, bound with patinated bronze into a shape resembling the shell of a turtle (or tortoise). The tiles present deep shades of iridescent amber and gold on the upper side, while the underside gives a milkier, opalescent sheen. It was designed to hang low in the room above a table, which layout the museum plans ultimately to replicate, according to Curator Sarah Coffin. Although much of the library’s original furniture has dispersed, several pieces of Indian-inspired cabinetry line its walls, displaying a range of art nouveau ceramics and glassware, including a beautiful Tiffany dragonfly lamp with pooled brass base.

Tiffany, De Forest and Carnegie were sympathetic collaborators on this imposing home, each of the three men representing the cutting edge in his respective field. Tiffany and De Forest had already worked together in a company founded by Tiffany in the late 1870s. As the client, Carnegie was an avid fan of innovation and his home introduced much in the way of latest technologies. He installed in it the first electrified lift (or elevator) in New York; the numerous Tiffany lamps decorating his library at the time were acquired as electrified lamps, not converted from oil or gas, as were other similar lamps of the period. Carnegie’s choice of Tiffany and De Forest signified his interest in the most advanced design ideas. That all three had been early proponents of the Art Nouveau movement perhaps says it all.

So, quaintly enough, these beautiful lamps decorated Carnegie’s own library. Famously, Carnegie Public Libraries were a major part of his philanthropic works and towns in the UK, US and Ireland were predominant among the thousands of beneficiaries of the Carnegie formula for funding public libraries. Accrington’s own Carnegie Public Library is among them, having been built in 1910 on land owned by none other than. . . . William Haworth.

A nicely circular round-trip across the pond, then, and a living part of Carnegie’s – and Tiffany’s – legacy in both Accrington and New York.

Look out for Haworth Art Gallery’s own turtleback tiles in its forthcoming display featuring Joseph Briggs and his mosaic work for Tiffany.