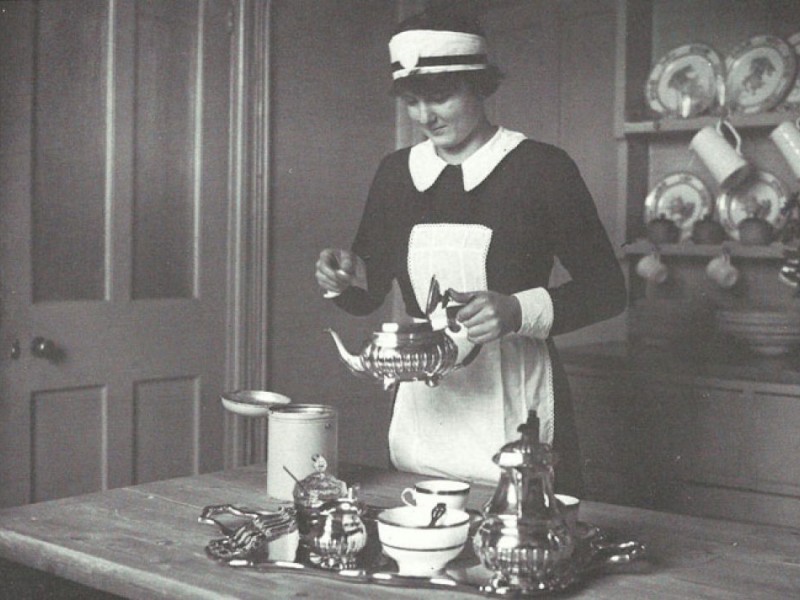 A fun, friendly and informative time was had by visitors to the Haworth at the Friends’ latest history and heritage event Sunday. Below Stairs and Beyond the Park served up a fresh look at the lives of the people who worked for the Haworth family and the world they inhabited at the turn of the last century in Hollins Hill, as it then was. Keen local historians and Friends founder members Jean Emmett and Roger Cunliffe engaged the audience in a fascinating social history of the Haworths’ era, and the industrial heritage of the local area – with a few props to boot!

Firstly, Jean uncovered the lives of staff who worked at Hollins Hill in its days as a private house. Key among these were coachman, William Beech, chauffeur, Joseph Taylor and valet, Abraham Naboth Imlah Whiston, who later became the gallery’s first curator. Jean also offered a glimpse into the life of Anne Haworth’s elegant companion, Ellen Priestley. Perhaps surprisingly, none of these family retainers was born in the immediate area: William hailed from Shropshire, Joseph from Manchester and Abraham from Cheshire, while Ellen was born in Russia. Jean helped to bring their personalities to life with colourful details of each one. An appeal to the many local people at the event elicited information about a previously unidentified gardener, which will help the Friends trace further details of his life.

Roger then shared his history of Baxenden, where the Haworth is located, detailing its numerous quirky name changes since first being recorded as Bastanedenecloch in the 1100’s and now often abbreviated, quite punchily (ahem), to Bash – so much simpler. Roger shared his fascinating insights into the various types of transport systems that have passed below the park on which Hollins Hill was built: from the construction of the road by Blind Jack o’ Knaresborough in the 1700s, to the old coaching routes established in the 1800’s (see earlier posts for more on these); from the steam trams which would have climbed the hill in the Haworths’ day, to the corporation buses that became the norm in the 1930s (more to come on these). Roger illustrated these changes with models of the trams in use from the late 1800’s to early 1900’s and a model of an old Accrington Corporation bus in its proud livery of navy and scarlet, the historic colours of the Accrington Pals.

The audience also heard about the old industrial buildings along the route of the former railway line from Accrington through Baxenden towards Manchester: the now demolished mills and the long-defunct Baxenden brickworks, in operation for just a few short  years and outshone, of course, by its more famous neighbour. Such is Roger’s enthusiasm for his subject, however, he proudly professes to building a small collection of rare Bash bricks!

After the presentations, audience members browsed through the fascinating documents, books, photographs, maps and charts that illustrated their subjects. Thank you to our wonderful speakers and to our lovely visitors for both their participation and for their kind donations to the Friends’ funds. Our next public event will be the children’s Fun Palace project held at Accrington Library on October 6th. Stay posted for more details.