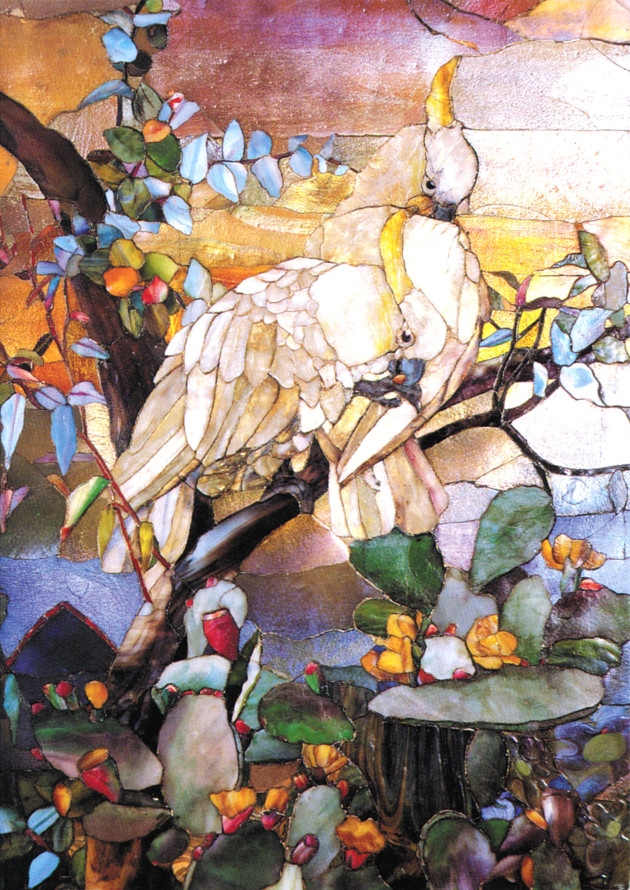 A (literally) brilliant benefit of being a Friend of Haworth Art Gallery: days like today when we had the privilege of Curator Gillian Berry’s insights on the Gallery’s exquisite Tiffany glass collection – and an exclusive opportunity to handle several Tiffany pieces under the strict supervision of the Haworth’s Alison Iddon. All in the sparkling winter sun of a late January day liberally dusted by frost and snow.

Gillian brought to life the story of Tiffany Studios, its personalities, and – crucially – the exquisite glass for which it became world-famous. Louis Comfort Tiffany, son of the famed jeweller Charles Tiffany, was the Studios’ founder, whose artistic vision, family wealth and marketing genius were at the core of the creative powerhouse the Studios would become. After many successful decades in business, Tiffany handed control of the Studios to Joseph Briggs, the Accrington-born engraver, who had worked his way to the top of the ladder through the roles of errand boy,  mosaic maker and studio foreman for Tiffany. Joseph would later bequeath to his hometown its world-renowned glass collection.

Joseph was an accomplished mosaic craftsman, but only recently has his critical contribution to the artistic direction of the company become more fully appreciated – and the extent of his role in creating the myriad mosaics that were a major part of the Studios’ output; as foreman, he worked alongside other such formidable talents as designer Clara Driscoll (see earlier posts on Joseph and Clara). For this reason, the Haworth’s collection has been redisplayed to reflect his prominence and will continue to be adapted to respect the role he played.

A third generation engraver, Joseph was an apprentice at Steiner & Co in Accrington, where his father also worked, before leaving to seek his fortune in the States at the age of 17. Steiner, an immensely successful calico printing firm, proved to be a good training ground for Joseph; it was here that he honed his skills, engraving wooden printing blocks for the acres of Art Nouveau patterned fabrics the company sold to customers worldwide. In a wonderful piece of circularity, Joseph had initially trained at the Accrington Mechanics’ Institute, of which William Haworth (whose home, Hollins Hill, would later become Haworth Art Gallery) was a patron, and his father before him a founding member.

The dynamism of Briggs’ and Tiffany’s collaboration was astonishing and the company’s output immense. At its height, the Studios employed 540 people, many of whom were artists: designers, glass blowers, glass cutters and mosaic artists, as well as chemists. Notable among the latter, Tiffany employed Parker McIlhenny, who perfected the technique for iridescent glass that is a feature of much of Tiffany’s output. Arthur Nash, an English chemist, managed Tiffany Furnaces and was critical in helping Tiffany create the extraordinary array of colours and effects, for which the Studios became renowned, by the application of different oxides. Among their accomplishments was the ability to create degrees and styles of opalescence and translucency that could even mimic folding fabric.  Often used for windows and mosaic panels, pieces were cut from large sheets of glass, production of which Tiffany brought in-house under Nash. Many such sheets remain in the vast Neustadt Collection of Tiffany objects in Queens, New York.

Design and experimentation in glass colours and finishes brought vibrancy to an astonishing range of vases, lamps, mosaics and windows. Iridescence became a trademark feature of various different forms of Tiffany vase, including Lava glass forms with their molten appearance (see examples pictured below). It was also sometimes used in combination with Millefiori technique, where rods of molten glass were fused to a glass form and layered over with a paper-thin sheath of transparent glass to ensure a smooth outer surface. Examples made in this way became known as Paperweight vases. Opalescent glass was also used with this technique, as seen in the elegant example above. A similar combination of techniques for decorating glass, by layering from the inside out, was used for other rare and complex pieces, such as the lifelike Aquamarine vase in the Haworth collection – one of only three known still to be in existence.

Slightly more restrained effects were created by carving opalescent glass into Cameo glass, which has a matte lustre (see the lovely blue example above). Cypriote and Byzantine styles both hark back to classical times, albeit in very different ways; Cypriote vases present a largely matte, pitted exterior, mimicking ancient amphora, while Byzantine ware is highly lustrous and formal in style. Opalescent glass also featured in many Tiffany mosaics and windows in opaque, semi-opaque and translucent forms. The breathtaking mosaic of Sulphur-crested Cockatoos pictured above – a key element of the Haworth’s collection that is often sought for loan by museums internationally –  illustrates many of the impressive range of effects and colours Tiffany managed to achieve.

Great marketer and entrepreneur that he was, Tiffany adopted and trademarked the term ‘favrile’, a derivation of the old English word ‘fabrile’, meaning hand-wrought, to describe the hand-crafted nature of the company’s creations. Although an accomplished artist himself (Tiffany moved from painting to the medium of glass because of its ability to bounce light around) it is unlikely – ironically – that Louis Comfort Tiffany personally created any of the pieces for which his company became world-famous. Notwithstanding, he was the mastermind behind the company, and thanks to him – and critically to Joseph Briggs – we have this stunning collection on permanent display in sunny Accrington!

The Friends would like to thank the gallery staff for the unique opportunity of this lovely event. Next time you visit the Haworth, be sure to take time to appreciate the delicate beauty and amazing variety of this precious bequest.

If you’d like to join the Friends and take part in future activities, please contact us via haworthaccrington@gmail.com